On Friday (6/3), Institute of International Studies, International Relations Department of Universitas Gadjah Mada collaborated with International Relations Department of Universitas Paramadina in organizing Round Table Discussion on Global Development of Lethal Autonomous Weapon Systems (LAWS) and its implications on Indonesia’s foreign policy and defense. The event was attended by various stakeholders, ranging from government, scholars, the military, researchers, and experts who proceeded to discuss the matter in hand from different perspectives.

According to the International Committee of the Red Cross (ICRC), the working definition of autonomous weapons (also known as autonomous weapon systems/lethal autonomous weapon systems/killer robots) is a weapon system that possesses autonomy in executing its critical functions of selecting and attacking target without human intervention. Their development is a consequence of the industrial revolution. The lethality of this type of weapon is not inherent in itself. Instead, it depends on the characteristics of the weapons and how they are deployed.

Autonomous weapons are strongly related to international humanitarian law. Notwithstanding their close ties with war practices, there exists a discourse of the use of autonomous weapons in peace, particularly for law enforcement purposes. Many believe the weapon systems are capable of precise targeting, yet the debate on the risk of cyber attack during deployment persists, which constitutes the problem of accountability and alleged violation of international humanitarian law. The debate focuses upon who is responsible: the field operator, the commander, or the creator of its algorithm?

Beside legal considerations, ethics also need to be taken into account. In the forum, questions such as “will autonomous weapons be able to comply with international humanitarian law principles?”, “to what extent should humans have control on weapons?”, “as autonomous weapons are allowed to select and decide upon targets on their own, should it be considered crossing the line?” arose. 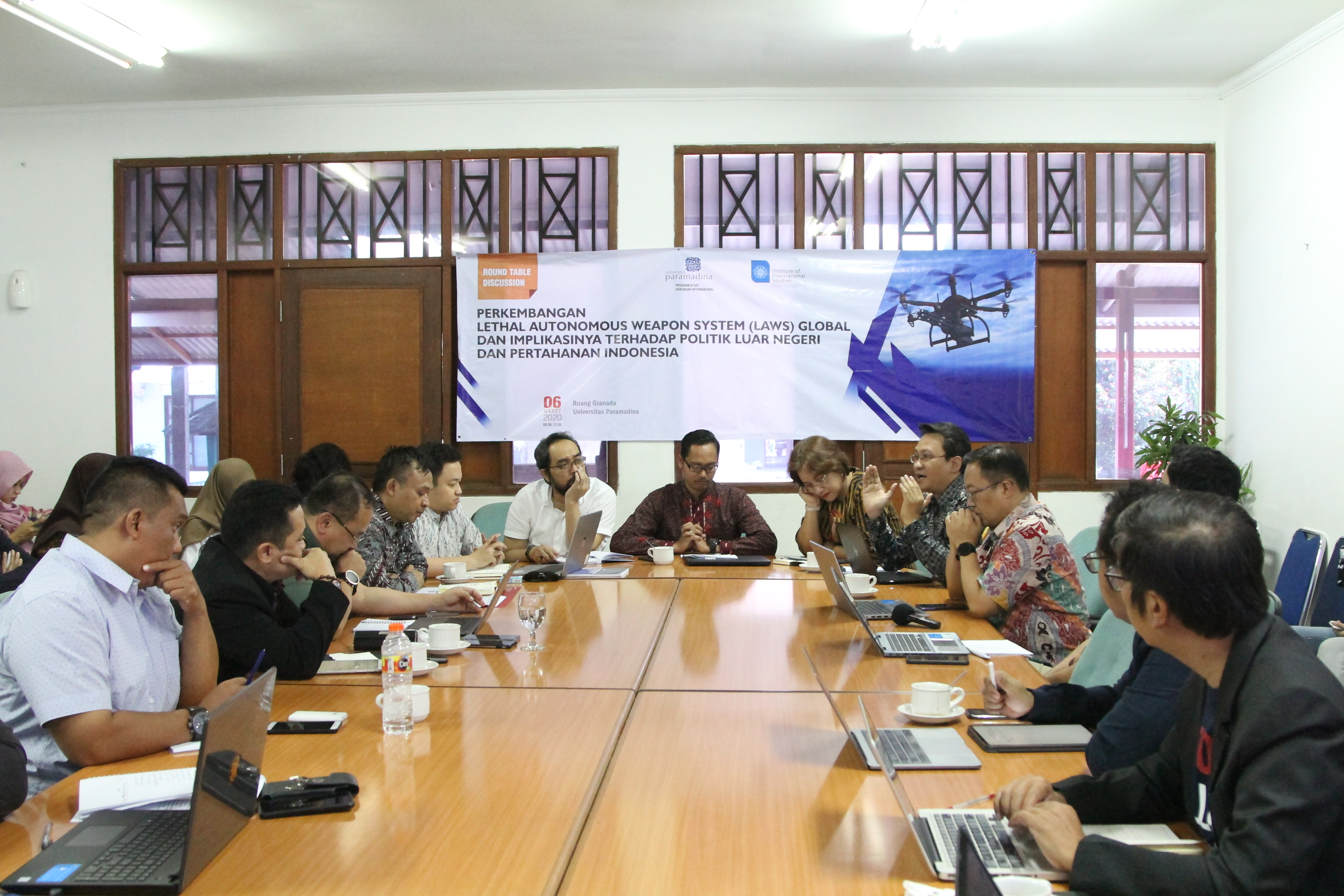 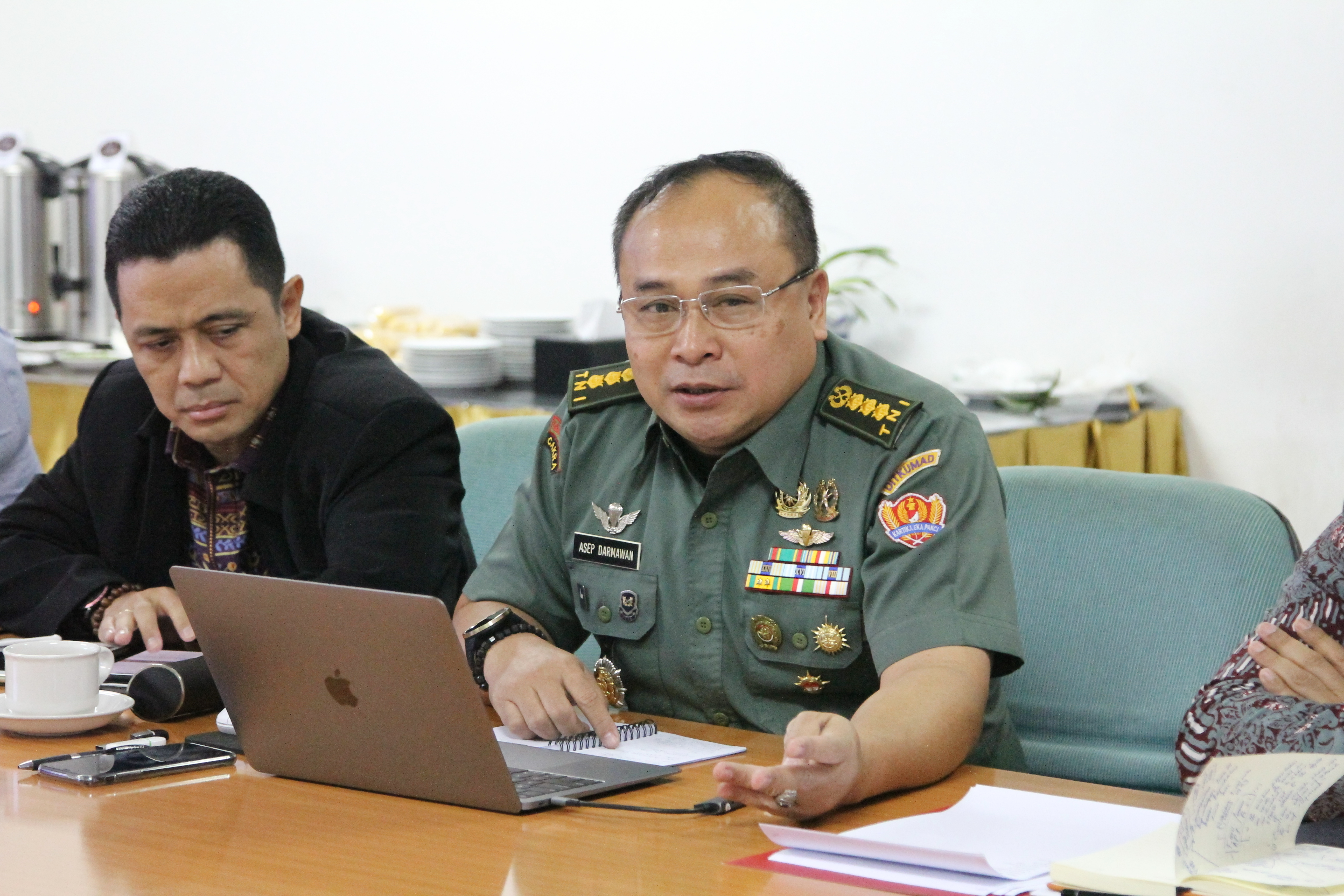 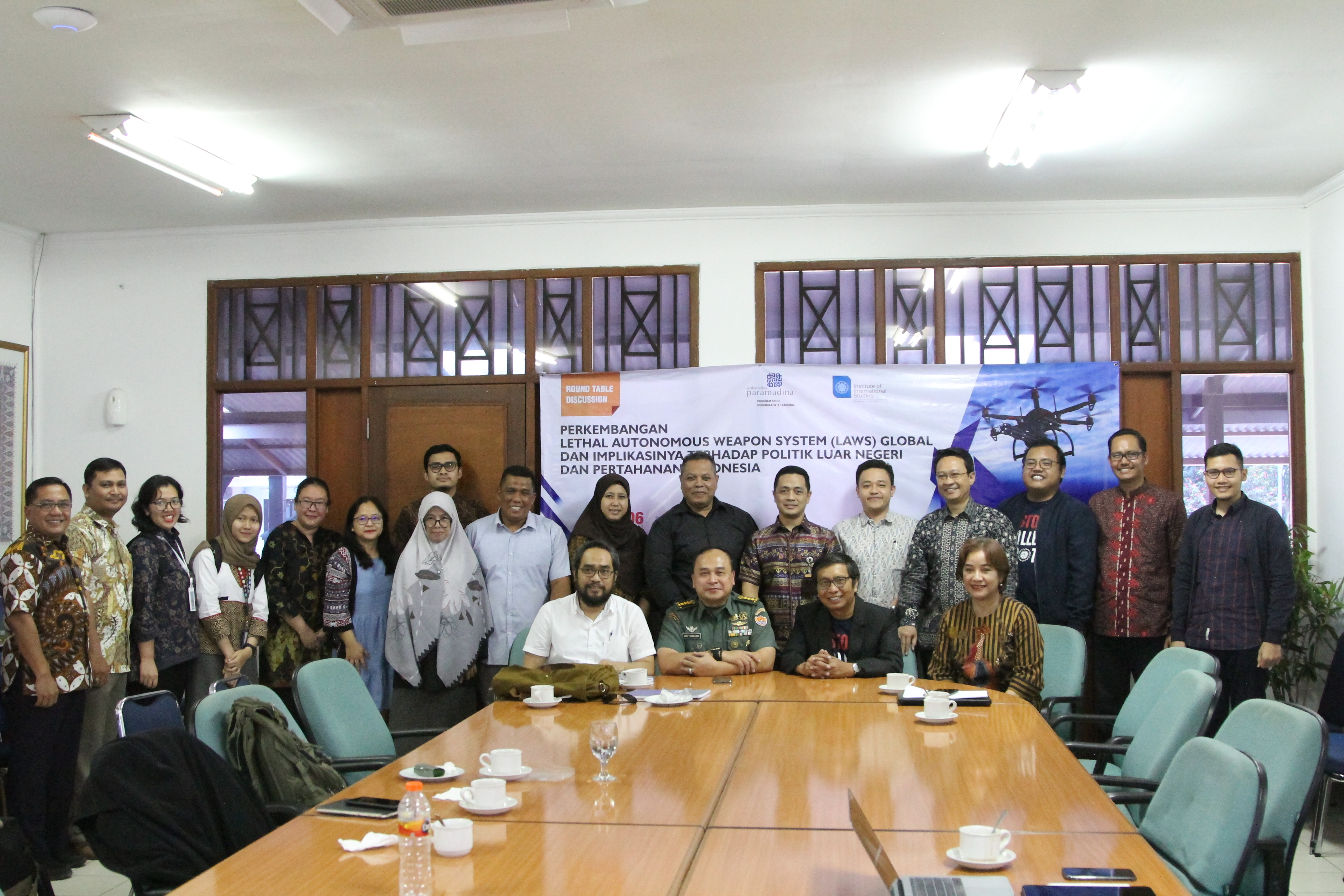 Thus far, Indonesian government has not taken a firm stance on the issue. Indonesia still serves as an observer and not a state party to the Convention on Certain Conventional Weapons (CCW). While Indonesia is not against the accession of the Convention, the government might have other priorities. That said, Indonesia has not come to the realization of the urgency and potential threat of the weapon to humanity, keeping in mind the existence of autonomous weapons will, slowly but surely, develop enormous destructive effect.

It is imperative that the Ministry of Foreign Affairs, with support from all national agencies, act as the frontline in convincing the government to access CCW. Moreover, CCW need to be translated into Bahasa in order to transform it into national law. In the future, Indonesia is also expected to increase participation in the forum. Otherwise, the discussion will only stay in academic domain.

As business of unmanned aerial vehicles (UAVs) is also in trend, Indonesia doesn’t want to be left out. Presiden Joko Widodo wished for UAVs to be developed. However, UAVs were not intended to be weapons originally, but to execute the mission of 3D: dull, dirty, dangerous. In other words, such aircrafts weren’t built to be armed. It changed, later, after the national army Tentara Nasional Indonesia (TNI) decided that drones should execute military missions. As much as UAV is beneficial, it can disrupt traffic airline, more so when armed. Unlike autonomous weapons, UAV is already regulated under several ministerial regulations.

The existence of autonomous weapons is highly dilemmatic. Their use is beneficial as they will not be able to experience fear, as well as select and attack targets on their own. Furthermore, they are less costly to deploy. On the other hand, autonomous weapons raise questions on the aspects of chivalry, humanity, and morality in war. In this situation, international humanitarian law plays a central role. Instead of limiting a country’s military advancement, international humanitarian law ensures that steps taken by states are in line with humanitarian principles. Its existence highlights how lack of regulation on autonomous weapons brings about concerns of accountability when violation occurs.

Right now, the utmost priority should be placed on defining typology of LAWS, as there is no existing consensus on the term autonomous weapon systems (AWS). Scholars ought to conduct research regarding autonomous weapons since it is a collective responsibility to create discourse on the urgency of the matter. It is important to note that the situation of AWS now is more complex compared to nuclear weapons. Total ban on autonomous weapons is difficult since the weapons are beneficial for military strategy, namely in efficiency and effectivity when destroying opponents in a shorter period. In addition, AWS also possess defensive aspects, making it even more difficult to entirely abolish them. In brief, the problem of AWS lies not on the core of their existence, but rather on how they are deployed.

Want to join the discussion?
Feel free to contribute!